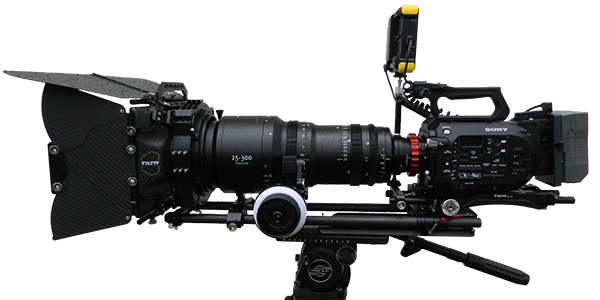 The PXW-FS7 is one of Sony’s best ever selling broadcast quality cameras. Its ergonomic form factor plus its lightweight, portable design means it is easy to carry up hills in search of wildlife!
Key specs include 4K (4096 x 2160) resolution, 180fps, 600Mbps internal and raw external recording. It also boasts an incredible 14 stops of dynamic range giving it an ultra cinematic look and a native sensitivity of 2000 ISO, meaning fantastic low light performance too.
It’s not hard to see why it quickly became adopted by companies such as the BBC. Channel 4 are ditching their more expensive cameras in favour of the FS7 simply because it matches or even beats them for performance and at a fraction of the cost.

The recording format is XAVC, which was first used in the PMW-F55 digital cinema camera. As with the F55, 4K (4096 x 2160) 60p 4:2:2 10-bit recording is possible at a high bit rate of 500Mbps or 600 Mbps. QFHD (3840 x 2160( and HD (1920 x 1080) resolutions.
We have spent a long time investigating the camera market and after much research, deliberation and a lot of actual hands on experience (we have been using this camera on our courses for several year’s now) with the FS7 and all of the other cameras available, we are confident that this is simply the best choice for not only the Wildlife Film School but all-round, this is an outstanding cameras. 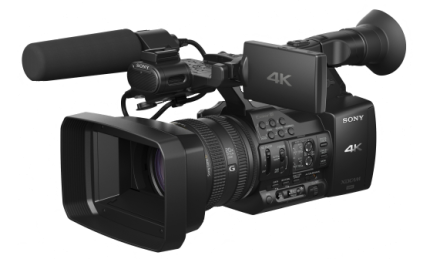 The Sony Z100 makes for a wonderful B-camera, when filming wildlife (and for a many people would be an excellent choice for your principle camera) as it not only films in 4K but also sports a internal 600mm lens (35mm equivalent). This camera is now a little dated, having been superseded by several newer models; However, all of the newer models have a much shorter lens (some, half the length) so we have decided to continue to use this camera due to it’s longer lens system.
Again the recording format is the same as the Sony FS-7 (XAVC) which was first used in the PMW-F55 digital cinema camera. As with the F55, 4K (4096 x 2160) 60p 4:2:2 10-bit recording is possible at a high bit rate of 500Mbps or 600 Mbps. QFHD (3840 x 2160( and HD (1920 x 1080) resolutions.

At the Wildlife Film School we like to offer our students as many multiple options as we can, so they can make an educated decision in reference to making a purchase.
For example: When filming with the Sony FS7 fitted with a 600mm lens, you will need…
An external 4K lens (£30,000+), a set of Lens support bars (£3,000+), a heavy duty tripod capable of supporting all this weight (£7,500+) with the whole system will weigh approximately 20Kg.
The purchase of a Sony Z100 has a build-in 4K 600mm lens, no need for Lens support rails and a tripod that only needs to support 4Kg making its lightweight, portable design extremely easy to carry up hills in search of wildlife. 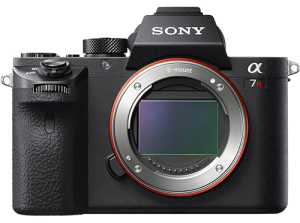 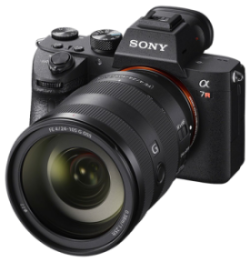 The Fast Hybrid AF system´s dense extra-wide focal plane phase-detection AF coverage keeps a subject in sharp focus entirely throughout the frame, while 5-axis image stabilization reduces blur which otherwise tends to affect hand-held shots. With an insane maximum ISO of 409,600 and incredible noise handling, this camera enables you to keep filming later into the night and start earlier in the morning than any other camera currently available – ideal times of the day to film the wildlife.

Furthermore, the Sony A7R Mk.2 has 4K video recording capabilities, as well as slow-mo up to 120fps and a dynamic range of 14 stops, meaning it’s a perfect combo with the Sony FS7. 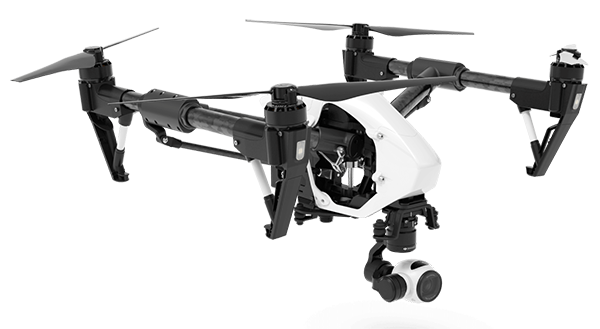 Ariel photography and film use to be the luxury of serious documentary filmmakers with a serious budget… not any more.

In 2019 we have decided to up our game and update our Quadcopter from a DJI Phantom 4 to a DJI Inspire. Our main reason for doing this is the DJI Inspire can be operated by two different remotes at the same time; therefore, unlike the DJI Phantom where you had to fly the Quadcopter whilst steering it to point the camera in the correct direction; the DJI Inspire can have one operator operating the flight of the Quadcopter, whilst a second operator independently steers the camera to film your intended subject.

The DJI Inspire lifts the art of ariel camera operation to a whole new level. The carbon fibre chassis lifts up out of the way of the camera offering a true 360 view of your surroundings. Whilst filming in 4K a live full colour video image is streamed back to you live, so you can see at all times exactly just what you are filming; and with a minimum flight height of 1 meter and a maximum flight distance of 5000 Meters, with the DJI Inspire, the sky is the limit, literally.
We are sure you will agree that whilst working within the CAA Rules and guidelines the DJI Inspire will be an extremely useful tool in any documentary film-makers toolbox. 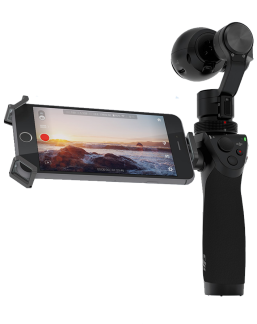 Not only this, but it also has the option to move the camera head in any direction by a simple operation of ´touch and drag´ via the attached video monitor… effectively turning the whole system into a remote controlled video headed camera, and operating via Bluetooth technology this can be operated up to 100 meters away from the operator. This camera and gimbal system really is a fantastic production tool. 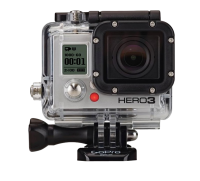 Whilst it of course is not the main camera used on the courses, it´s not even the most up to date model by far (in fact its so old it is now almost a disposable camera); its skill set and versatility still mean it can do things no other camera can. Such a small, lightweight camera, it’s a no brainer to bring along as you never know when it might come in handy!
We have a total of 3 of these cameras, with all the accessories that come with them. 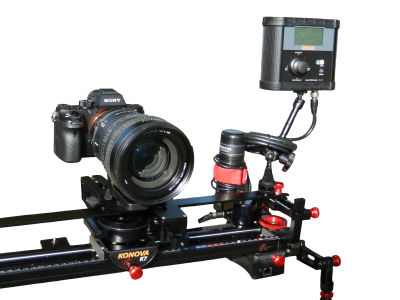 One of the camera movements often used in television / film production is a slide. This moves the camera slowly and smoothly from point A to point B. These points are not often far apart, and the movement is often used to show peace and tranquillity or the passing of time. For example: The images often created are, slowly moving through trees back-lit by bright sunshine or the camera appearing from behind an object, to fully reveal a wider view.

The K7 slider is the longest Konova manufacture at 1.5 meters in length, and offers a variety of different lengths and camera movements. The slider (normally being used horizontally) can also be used vertically and at 45 degrees offering many different camera movement angles (replacing other items such as a small camera jib)

The K7 slider also comes with Konova´s computer controlled movement controller to precisely control the position of the camera on the slider, whilst 3 different speed motors allow the camera movement to be fast, medium and slow. We also have a `Pan & Tilt´ bar which rotates the camera slightly as it slides from point A to Point B whilst keeping the centre of the frame targeted on a single central point / item.

• The photo above shows our Sony A7R Mk.2 fitted to the K7 Slider. 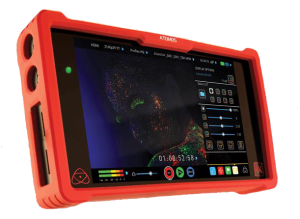 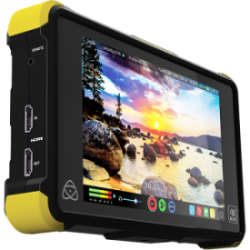 Atomos manufacture a wide range of Video Monitoring equipment and recorders for use in all genera´s of production, from high-end cinematic rigs to DSLR single camera operators.
Atomos are supplying a range of equipment for use during our courses; allowing off-camera recording in 4k. Multi HDMI connection, XLR Audio input, Time-Laps Recording, Pre-roll, and other monitoring functions like LUT´s, Waveform, Vectorscope, Focus Peaking, RGB Parade and False Colour.
These units really are amazing pieces of kit. 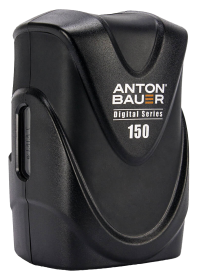 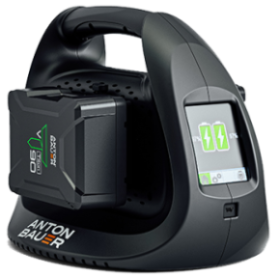 Anton Bauer manufacture a wide range of professional camera batteries and fast chargers for use in both the broadcast and Cine worlds, all fitting ergonomically to the latest high-end cinematic rigs or shoulder-mounted ENG cameras to DSLR single camera operators.

Anton Bauer sponsor us a range of equipment for use during our courses; their ‘Anton Bauer Cine 150 gold mount’ V-mount batteries and ‘Digital 150/190 gold mount & V-mount ENG Broadcast batteries’ as well as their ‘LP4 V-mount fast charger’ for digital ENG batteries, allowing you to try out different systems from their range, all of which perform to the max out on location.